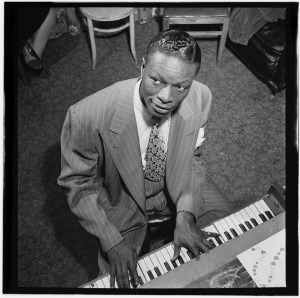 For those who did not know that Nat King Cole had begun his career as a pianist and  jazz singer, they may enjoy several jazz-infused albums:
Nat King Cole at the Sands. Capitol Records SMAS-2434 (1966). Arrangements by Dave Cavanaugh, Nelson Riddle, and Pete Rugolo. The singer plays piano on some songs as well.
Nat King Cole Just One Of Those Things. Capitol Records W903 (1957). Orchestra conducted and arranged by Billy May.
Nat King Cole Sings/George Shearing Plays Capitol Records SW-1675 (1963) George Shearing Quintet.
In each of these recordings Nat King Cole displays a relaxed, sophisticated and skillful approach to singing with a full-fledged jazz orchestra or small jazz group. For fans of Nat King Cole’s trio days when he sat at the piano singing and playing ‘swing’ versions of his own songs and others, these jazz oriented albums will come as no surprise. Nat King Cole had a killer stride piano style and could swing with the best of them, but for the vast majority of his Capitol Records era balladeer style, these recordings show what a great improviser and jazz stylist he could be given the opportunity. Jazz arrangements can be challenging for a pop singer, but for a singer who has innate talents of melody, harmony and rhythm…well, the singer shines being at home in his element. 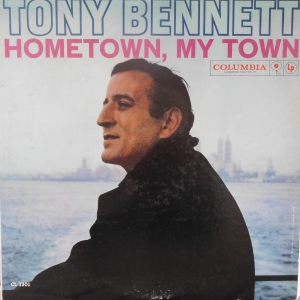 In his 1964 Jazz Encyclopedia, Leonard Feather stated:  “…Bennett is a first-class pop singer and not a jazz artist.” (p.62) To give Leonard Feather credit, in the fifties and early 1960s most of Tony Bennett’s  commercial output had been a string of big hit singles in the pop vein that were often produced by Mitch Miller for Columbia.  However, in the same inclusion, Feather acknowledged that Tony Bennett had also sung with the orchestras of Duke Ellington, Count Basie and Woody Herman…so he probably should not have been so emphatic in his statement.  Leonard Feather’s mistake was to define jazz singing too narrowly.  Jazz is an art form that has many different characteristics and qualities.  Some of the qualities of jazz singing have been described in a previous essay on this blog – they include:  having a keen sense of time, perfect pitch, an ability to use the human voice in a way similar to the qualities of a jazz musician playing a wind instrument.  Tony Bennett does all of these things in his masterful interpretation of the jazz standard Close Your Eyes (Bernice Petkere) that was recorded by him with the Ralph Burns Orchestra in 1961. The tenor sax solo in the middle of the piece is by Zoot Sims.  Bennett himself uses his voice with the strength and power of a saxophone.  There is no question that Tony Bennett is the main focus and chief soloist in this powerful Ralph Burns arrangement of this famous song.  The rhythm section of the band drives the song relentlessly and Tony Bennett soars over the changes like a masterful jazz musician until he brings the song to its conclusion by singing a perfect F minor pentatonic scale not once but twice! 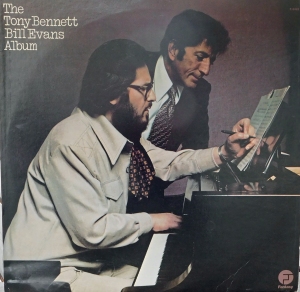 To further solidify Tony Bennett’s credentials as a major jazz artist, however, one has no need to go further than his brilliant collaboration with jazz pianist, Bill Evans, in 1975 and again in 1977.  Another major characteristic of a jazz singer is the singer’s ability to hear harmony and the subtle micro-pulses of rhythm.  Bill Evans was one of the most subtle jazz musicians of his generation.  Everyone wanted to record with him.  On the other hand, however, not everyone had the ‘chops’ to interact with him due to his use of altered harmonies, displaced rhythms, and subtle alterations of a song.  A pop singer, even a great pop singer, would struggle if they were to sing with Bill Evans supplying the harmonic and rhythmic background.  Tony Bennett had no problem at all, and in fact, their collaboration raised the bar of a singer/pianist partnership.  It may never be equaled.  There are several times during these duets when Bennett’s voice provides the rhythmic propulsion to their performance, such as on The Touch of Your Lips (Ray Noble), Make Someone Happy (Comden, Green, Styne), and Waltz for Debbie (Evans).  A jazz singer not only handles the melody and the words, but he or she also colors the harmony and adds  suppleness to the rhythm.  All good jazz singers engage the tune on all these levels.  When a jazz singer and a pianist collaborate on a song, both artists interact in ways where they are both free to explore simultaneously because neither has to play the supportive role for the other unless they wish to do so.  Evans’s sense of pulse and harmony infuses Bennett’s and in a similar manner Tony Bennett’s approach to the song informs Bill Evans’ note choices and use of rhythm.  Their partnership on the classic My Foolish Heart (Washington – Young) displays subtle rhythm, colorful harmonic touches, fresh approaches to shaping phrases – it is one of the most perfect collaborations in the history of jazz duets evoking the creative partnership of Louis Armstrong and Earl Hines or Django Reinhardt and Stephane Grappelly.  Two great musicians improvising simultaneously and yet sounding as one in spirit. (Tony Bennett, 1975)

Tony Bennett told interviewer James Isaacs in 1986 that his voice teacher lived on 52nd Street in Manhattan.  According to Bennett, his teacher told him “Don’t imitate singers, imitate musicians.”  She told him to pick out the name of any jazz artist whose name was displayed on the awning of one of the local clubs along 52nd Street and emulate the style of that artist.  “So I liked saxophones, and I liked the way (Art) Tatum made a production out of a popular song.”  (Bennett, Tony Bennett/Jazz, 1987)  In this very interesting and insightful interview, Bennett also told James Issacs that once he was accepted by jazz fans he was pleased to be able to appear at jazz concerts, and he realized that he “wasn’t just a ballad singer anymore.” (Bennett, Tony Bennett/Jazz, 1987)

One of the most important qualities of a jazz singer is that singer’s ability to create elastic and pliable phrases which play with the beat of the song.  Many singers in the jazz field have this essential talent (the list is too long to enumerate but would certainly include Sinatra, Vaughan, Mel Torme, and of course Ella Fitzgerald to name but a few.)  Tony Bennett displayed this skill in the early 1950’s when he recorded with jazz groups, and over the ensuing years he has consistently demonstrated this trait when he interprets the classic songs of the great American songbook.  His sense of timing and rhythm not only informs the supporting musicians of the metric subtleties of a song but it also informs the audience of the nuances of the song’s lyrics.  Sometimes, it takes a jazz singer to enlighten the listener to the inherent beauty of a song.